When the issue of diversity has come up I’ve noticed that the concept has different meanings for people, depending on your ethnicity, your culture, your sexual orientation, your level of education, financial status, employment status, political affiliation, the community you live in, and how you’ve been raised among a myriad of other factors.

My definition of diversity means being open to accepting and respecting the differences among people, cultures and perspectives. And by “differences” I mean the differences in characteristics, ideas, points of view, thoughts, dreams, goals, standards, gender, belief system (religion), etc.  It means having a variety of people from other races and ethnicities together in the same environment working for the same goals. From my perspective, diversity promotes self-growth, enhances creativity, and learning among individuals that in turn helps the community as a whole.

I think it’s important that we’re careful in the way we frame the concept of being culturally diverse. The fact is diversity extends far beyond merely race and culture. It encompasses a variety of dimensions of differences. It defeats the purpose if we find ourselves reinforcing stereotypes and promoting an “us versus them” mentality.

But it is clear from the results of the recent election, that a large percentage of folks are questioning the benefits of living and working in a country that embraces diversity of race, ethnicity, gender and sexual orientation. It is also evident that a large percentage of folks feel like if their job, or neighborhood were to become “diverse“, it could cause discomfort, or encourage conflicts and other nonsensical problems.

The sad fact is that as much as I would love to lay the blame for this kind of thinking at the feet of our newly elected President, the reality is this is a sentiment that many folks have been harboring for quite some time now. However, I do believe that many feel liberated and empowered to speak their truth, in words and actions, thanks in large part to our newly elected President, and all of the values and standards he espouses to live by.

And then we have our education system. As parents, we should be asking if the schools are respectful and representative of the myriad of cultures that make up their student body. We have a responsibility to help shape the process that aids our kids with the formation of relationships with kids from other cultures. 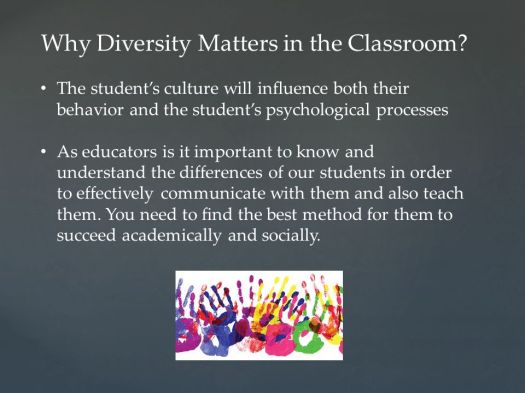 There can be no denying that a multicultural education, for our youth, is a necessary and vital component of a healthy community.  Our kids are done a disservice when it is apparent that their school doesn’t respect diversity, while simultaneously teaching all students to become productive and participating members of society. How are they to accomplish this without exposure to other cultures?

I truly believe this issue of cultural diversity must be introduced in the early years because that’s when attitudes about and understanding of race are being shaped.  Kids need to understand the importance of respecting one’s individuality while promoting the respect for others! Those of us who work with kids know how crucial it is that our youth are exposed to racially and culturally diverse environments. The knowledge and social perspectives they stand to gain encourages the development of critical and complex thinking and reasoning skills.

There also should be an emphasis on the importance of kids sharing their stories and consequently the learning that is gained from listening to the stories of others. By building positive and healthy peer influence, we will witness our kids begin to change negative attitudes, perceptions, and behaviors about diversity.

If there is one thing that I have come to realize, it’s how important it is that we each take the opportunity to dialogue with someone from a culture different from our own.  Gaining that type of insight encourages the interest in perspectives that differ from your own, and that ultimately leads to better decision making and problem solving.  Simply adding social diversity to the agenda makes people believe that differences of perspective might exist among them and that belief makes people-in general- think about their words and/or behavior. Even simply being exposed to a diverse environment can change the way you think about situations and the way you perceive people.

I’ve had the fortunate opportunity to dialogue with women and men from many different backgrounds, cultures and ethnicities, and I tell you what I have learned from each of them has been truly enlightening. And during these conversations I have had the chance to dispel some myths, shatter some stereotypes, and educate in some instances, about Black American culture and life here in the US, from the perspective of a Black Woman.