The one thing that continues to perplex, anger and sadden me, is the fact that we live in a time where Women spend more time bitching about the next Woman when we should be focusing on uplifting and empowering one another for any and every reason, no matter how small.  It’s a shame to admit that damn near every Woman has had another Woman talk badly about them behind their back and most Women have talked badly about another Woman behind their back. And of course the backstabbing, drama and hurtful rhetoric is only amplified by social media and these damn reality shows. But that’s a blog for another time!

When we look at other Women, our first instinct is to judge: We look at what they’re wearing, how they’re wearing their hair…  We wonder about social and class status…it’s crazy just how judgmental we Women can be…about everything, and everyone, but in particular, each other.

We should embrace each other, support one another, and advocate for each other, you know… GIRL POWER!

I can look back at the different jobs I’ve had and can count on one hand (without filling it up) the Women I’ve worked with who were actually supportive and played an instrumental role in my personal and professional development during the time we worked together. Sad but true. I’ve worked with Women who:

Now as far as negative stereotypes and depictions of Women goes, as a Black Woman, I must admit I have been thoroughly disappointed and at this point, sickened at the perpetuation of certain stereotypes of Black Women by Black Women!! Smh. And the mindset that goes along with this ridiculous behavior is the epitome of ignorance. But the fact that we’ve allowed the negative perceptions of Black Women to become normalized is precisely what keeps Women disconnected from one another. Divided.

Obviously, not all Women are like this and there are plenty of men guilty of the same behavior, but why do so many Women try to tear each other down instead of lift each other up?

A huge number of Women are actually working hard to change this dysfunctional aspect of female culture, and all Women can and should be finding ways to do the same in their communities. Here are 4 things you can do today – and every day – to support the Women you encounter throughout your personal and professional journeys: 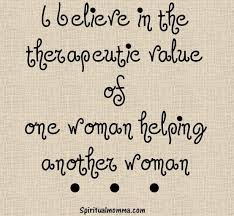 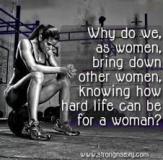 1. Collaborate and Share Resources:
This goes for whatever field of work you’re in. If you have a great idea, don’t feel like you have to hoard it to yourself. Collaborate, share, collaborate. … understand that you lift other Women as you climb by collaborating versus competing. Competition is healthy and we can compete, but we ought to focus more on competing with ourselves than the next Woman. In a world where Women are underrepresented in upper level employment, make seventy-nine cents to a man’s dollar, and are still discriminated against on a daily basis, lowering ourselves socially is the last thing we should be doing. As Women, we have to adopt the philosophy that when we work together, we can reap more benefits collectively than individually. 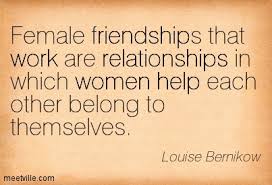 2. Make an Effort to Nurture Friendships:
Make an effort to nurture your female friendships. Having male friends can be cool, but nothing compares to the bond that Women can create with one another through authentic friendships. Friendship isn’t about finding someone; friendship is about developing consistent, positive behaviors over time with someone. We want to make sure we’re always open to welcoming new Women into our circles and fostering some of them into deeper circles so that we have meaningful friendships at all levels, at any given time. 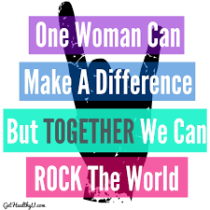 3. Celebrate Other Women’s Accomplishments:
Women tend to get less credit for our achievements and face pushback when we acknowledge our own successes. But we can celebrate each other’s accomplishments loudly and proudly.  When you advocate for someone, your status often goes up, too. Celebrate personal victories, and make an effort to spend more time spreading good words about other Women than spreading (or listening to) rumors, insults, and bitter commentary. 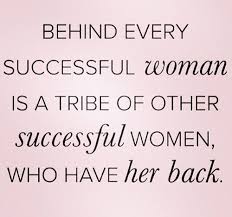 4. Stop Judging and Be More Accepting:
This shift in thinking requires a whole new mindset and the undoing of stereotypes, biases, and assumptions we all have when it comes to our fellow Women, particularly those we don’t know too well.  But, Women, it has to start with us. The challenge is for us to be conscious of our behavior, so we can avoid the assumptions and judgments that ultimately follow – especially in male-dominated environments, and when stereotypes against Women are widespread. We have to empower ourselves to become more resilient against all the ignorant thought patterns and behaviors.  For example, a pet peeve of mine is when a Woman is moody and emotional, it’s automatically attributed to PMS. That assumption invalidates us all. And Women, let’s stop the double standards. When we apply them, we empower the sexists and validate their misogyny, especially on social media.

As a Black Woman, I believe in the power of Women. Therefore, I feel I have a responsibility to support, encourage, uplift, nurture and Love my fellow Women. Now, I understand that technically, Women don’t have to support other Women, but so many of us choose to because we know we’re better together. It’s time to get focused on what really matters. Find Women that are different than you and take time to discover the things you have in common. We have a whole generation of girls who are looking at us to see how we treat each other. We need to show them what the power of being a Woman really looks like.

One Reply to “4 Ways Women can better support one another..”