It’s sad that we’re almost at the end of 2018, and yet this issue of “light–skinned” vs “dark–skinned” is still alive and thriving. So much so that the ridiculous concept has been given a name. “Colorism“.  Alice Walker first coined this phrase in her 1983 book, “In Search of Our Mothers’ Gardens” , where she defined it as “prejudicial or preferential treatment of same-race people based solely on their color.” It’s so prevalent with our youth today that I’m disheartened at the lack of self-love that too many of our young Black girls and boys have for themselves. 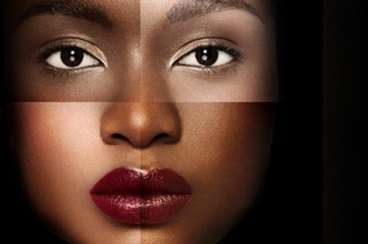 Now, most of us know where it originated from; it emerged throughout European Colonial and Imperial history, and is prevalent everywhere in all actuality. Now, Colorism didn’t disappear after slavery ended in the U.S. In the Black community, those with light skin received job opportunities that were off-limits to those who were darker-skinned. This is why upper-class families in Black society were largely light-skinned. Soon, light skin and privilege became linked in the Black community. It’s evident in countries as distant as Brazil and India and unfortunately is running rampant all throughout the continent of Africa. We have all witnessed this ignorance in the Television and Movie industries, which prefer to cast light-skinned people of color, and as much as we don’t like to talk about it, it’s in the internalized thoughts of some Latino, South-Asian and Black parents who hope their babies grow up light-skinned so their lives will be “just a little bit easier.”

The sad reality is that Skin-color bias affects perceptions and interactions in ways that are at once subtle and profound. Since Kenneth and Mamie Clark’s famous doll study of the 1950’s, research has shown that young folks of color are profoundly aware of our Country’s disdain for all that is Dark. Color-conscious banter between students reflects unconscious and unspoken biases—otherwise called implicit biases—that favor lighter skin.

A more recent example of research on Colorism comes from an assistant professor of Education at New York University, Eddie Fergus,  who conducted a study on Latino high school males. Fergus found that Mexican and Puerto Rican males with “white-looking” skin were perceived as White and sometimes treated more favorably, while boys of the same ethnicity who had darker complexions were perceived as black and often experienced discrimination. Interesting, right? Not only did the boys in the study identify as Mexican and Puerto Rican, but they all navigated through their communities as such and experienced folks placing different racial expectations on them based on the reactions certain folks had to their appearances.

The thing is, in the Black community, Colorism has sadly become that taboo subject that we’ve silently internalized and at the same time continue to affirm. I mean, let’s be real for a minute. Take a long hard look at print media, social media, and television: who are the Black people who are in positions of power? Who are the anchors on the news stations? We see for the most part, particularly women, who are lighter skinned with more European features. Who are the women who are portrayed as  the beautiful love interests in movies and music videos? More often than not, they’re lighter skinned. Let’s take a peek into the context of politics in the Black community, and examine just who has historically been in leading, formal positions of leadership—including the past President of the US. 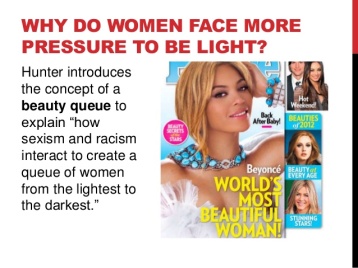 It’s these types of subliminal messages that you don’t think too much about, you just accept it for what it is and are thankful that it’s someone from the Black community being represented. But what’s happening is our kids are sitting back watching this and making these observations and they’re seeing who’s in power and they’re making the connections of who is more powerful and valuable in this society. It’s one of those things that although we didn’t create it, as a community we continue to operate from it. We gotta understand that while we can’t control living in a racist society,  we can control our participation within it. The actions of empowering and understanding who you are and knowing that beauty is not determined by the color of your skin can change the mind-set of young girls and boys who feel that their skin color makes them inferior and instead can promote self-worth and self-love.

7 Replies to “My thoughts on “Colorism””